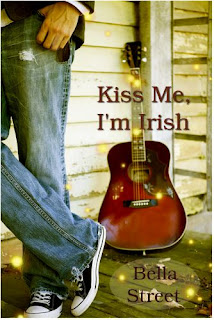 First of all I have to say a HUGE thank you to Bella Street for sending this to me, it was amazing!  I was devastated when I couldn't find a copy here.  It's definitely now one of my favourites.  When I first heard about it I thought it was the perfect book for me, time travel, piskeys, regency girl, hot Irish musician, magic, romance and did I mention HOT IRISH MUSICIAN?
I wasn't disappointed at all!


Plot:  Because she didn't want to marry a man old enough to be her father, regency girl Emily Musgrave is on her way to the convent on the orders of her strict Aunt Tremaine.  But piskey magic takes Emily from 1813 England to 2011 Tennessee, and into the care of Tinker and Liam.  A brother and sister that play their music in various downbeat, seedy bars to earn a living.

Liam wants to be a successful musician but he seems to be holding himself back, because unbeknown to Emily, of a tragedy in his past.
Liam is suspicious of Emily, her story of time travel is too extraordinary to believe, is her motive to scam them or is she some crazy stalker fan girl?  But despite his suspicions Liam is attracted to Emily.
What results is the comedy of Emily trying to get used to the new and very different world around her, as well as her growing feelings for Liam.
They might just be perfect for each other if Liam can overcome his suspicions and Emily can manage to stay in 2011.


Emily- Has a soft spot for the Irish.  Finds herself in many hilarious situations in her new environment.  She's attracted to Liam almost immediately.  Strong-willed and determined not to marry some old guy & then just as determined to escape life in a convent.  She soon learns to love aspects of the modern world and doesn't want to leave.


Liam- Has Irish heritage but was born and raised in America.  He wants to be a successful musician but holds himself back, but instead had found himself stuck playing downbeat, seedy bars, punishing himself.  When he starts to fall for Emily he thinks she deserves better and tries to make her see that.


Tinker- Liam's sister.  She's quirky and eccentric.  Can't seem to stop herself from pinching things...and takes a particular shine to gold.  She's kind to Emily, helping her get used to everything that's new to her and seems much more accepting of Emily's story of time travel that Liam.


Writing Style:  Both Emily and Liam's perspective were written but predominantly Emily's.  The writing was amazingly fast paced making it a quick read but it also hooked me in from the beginning and I didn't want to put it down.


Rating: 5/5 stars without a doubt!  This is definitely one of my favourite books now, there was nothing I didn't like about it.  The characters were charming and each had the humorous moments.  It was a sweet romance with a touch of the paranormal.  The romance was well paced, the attraction was there but the true feelings gradually built up.  I would definitely recommend this for fans of paranormal YA and for those that like romance.  For me this books definitely stands out among others with an original plot and unique characters that just make the book adorable.  I couldn't put this book, and when I had to I was thinking about it and getting back to reading.  I would absolutely read anything Bella Street writes after reading this.  This is book one in the Time For Love Series and I really hope that I will be able to get hold of the other when they come out because this was an exceptional story and I will tell anyone that will still listen to me talk about it.
Posted by wrathsqueen at 16:19