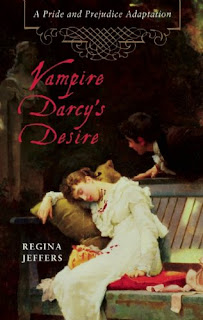 This is the greatest literary love story of all time, transformed into a heart-pounding vampire tale of romance, lust, and danger. In Austen's original novel, Darcy and Elizabeth are compelled to overcome countless obstacles - but that's nothing compared to what they face in "Darcy's Hunger". This inventive, action-packed novel tells of a tormented Darcy who comes to 'Netherfield' to escape the intense pressure on him to marry. Dispirited by his family's 200-year curse and his fate as a half-human/half-vampire dampir, Darcy would rather live forever alone than inflict the horrors of a vampire life on a beautiful wife. Destiny has other plans. Darcy meets Elizabeth and finds himself yearning for her as a man and driven to possess her as a vampire. Uncontrollably drawn to each other, their complex relationship forces them to confront their pride and prejudice like never before and to wrestle with the seductive power of forbidden love. Meanwhile, dark forces are at work all around them. Most ominous is the threat from George Wickham, the purveyor of the curse, a demon who vows to destroy each generation of Darcys and currently has evil intentions for the vulnerable Georgiana.
I normally stay away from Classic adaptations for fear of authors butchering a beloved classic but when I picked this one up the synopsis piqued my curiousity and I'm so glad that I did.
Cover: I really like the cover, it's an image that would easily be placed on a classic novel and then the addition of the vampire bite and blood showing that it's something a little bit different.
Plot: What if Mr Darcy held himself aloof because of a two hundred year old curse making him a dhampir?  Darcy has pledged to remain alone rather than continue his family's curse on any off spring.  Resolute not to marry so as to spare an innocent the reality of his life, this has worked out fine until he meets Elizabeth Bennet.  She brings light into his life and for the first time makes him feel like a normal man.
Characters:

Fitzwilliam Darcy- Noble and honourable character.  He decides on a life alone to spare others a life with his curse but he can't fight his attraction and growing love for Eizabeth.


Elizabeth Bennet- Strong and independently minded Elizabeth makes up her own heart and mind about Darcy and when she learns his secret she won't give up on him.


George Wickham- As with the original Wickham is Darcy's enemy and has been around since the curse was bestowed on the Darcy line and has gone after every generation of the Darcy's.  A full vampire that creates minions and wants nothing more than Darcy dead.


Georgiana Darcy- Darcy's younger sister.  The person Darcy's cares most for, and later Elizabeth too, but Georgiana looks like Wickham's long, lost love- the woman that caused the curse.


Writing Style:  I found Regina Jeffers had a really easy to read writing style, making it really quick to read.  Some original dialogue is included and it's great to see it used in a slightly different context and keeps the humour of Jane Austen's writing.


Rating:  4/5 stars.  I enjoyed this book so much, and I think this is because we saw more from Darcy's perspective and as a huge Darcy fan this made the book for me.  There was also parts from Wickham's perspective, letting the reader into his mind set.  Of course there is Elizabeth's perspective too.
Some parts seamlessly transitioned into a gothic/paranormal novel whereas some parts seemed a little forced.
I would recommend this for fans of the paranormal genre, particularly for fans of vampires and the vampire/dhampir plot is a great one and is probably different from others you'd have read.  Not all fans of the orginal Pride and Prejudice will enjoy this but if you like paranormal romance you might do or you might not.  It's kind of a gamble.
You also don't have to be a fan of the original to enjoy this adaptation.
I enjoyed this so much that I will be checking out Regina Jeffers other books and maybe other classic adaptations.
Posted by wrathsqueen at 15:17