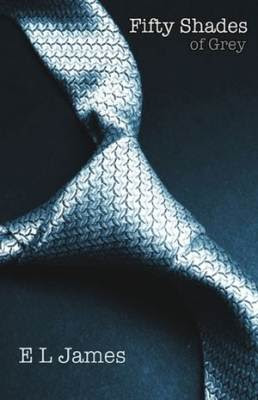 Cover:  I like the simple, relevant cover.  They could so easily have plastered some smutty image on the cover but have instead made it tasteful.  And I love that the spine is numbered-more books in a series need to do this!

As I'm sure you're all aware this book has been everywhere!  All over twitter, facebook, talk shows - even our national newspapers here in the UK.  Naturally when there is this much hype over a book my interest is piqued, and thought that I would give it a try - even though erotic fiction is not something that I would normally consider.  Then when I found out it started life as a Twilight fanfiction (I know a lot of people aren't keen on Twilight, but I still enjoy it) that made up my mind.
"Obsess and Posses you".  Boy it really does!  I didn't expect to like this book half as much as a did.  I've now become one of those crazy fan girl types.

It's true that dialogue throughout the book is very 'British' considering it's set in the US, (the author is British) but being British this didn't overly bother me, but I can see that for US readers this could be rather peevish.
It's also true that if you don't like over-bearing alpha-male type 'heroes' then you won't be keen on this book.
Ok so there are things that I could criticise if I wanted to but the truth of the matter is that my enjoyment of this book simply overshadows and criticisms that I might have found.  Yes I found myself hooked on the plot, not wanting to put it down, just wanting to turn page after page after page.


However I would say that if you've seen all the hype and been curious or tempted, then give it a go (as long as you are able & old enough to handle the mature content), I was skeptical but am now completely obsessed (am moving straight on to book 2 Fifty Shades Darker).  This genre is not something that I would have ordinarily picked up, and I would have missed out big time on a book that a thoroughly enjoyed and couldn't put down!