The Penny Bangle by Margaret James 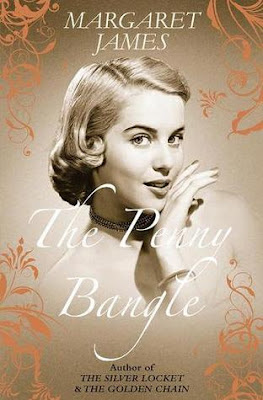 Received for review
Paperback: 304 pages
Publisher: Choc Lit (7 May 2012)
Language English
ISBN-10: 1906931771
ISBN-13: 978-1906931773
When should you trust your heart? It's 1942 when Cassie Taylor reluctantly leaves Birmingham to become a land girl on a farm in Dorset. There she meets Robert and Stephen Denham, twins recovering from injuries sustained at Dunkirk. Cassie is instantly drawn to Stephen, but is wary of the more complex Robert - who doesn't seem to like Cassie one little bit. At first, Robert wants to sack the inexperienced city girl. But Cassie soon learns, and Robert comes to admire her courage, finding himself deeply attracted to Cassie. Just as their romance blossoms, he's called back into active service. Anxious to have adventures herself, Cassie joins the ATS. In Egypt, she meets up with Robert, and they become engaged. However, war separates them again as Robert is sent to Italy and Cassie back to the UK. Robert is reported missing, presumed dead. Stephen wants to take Robert's place in Cassie's heart. But will Cassie stay true to the memory of her first love, and will Robert come home again?

This is the third novel a trilogy. Previous novels are The Silver Locket and The Golden Chain but work as stand alones.

This book really appealed to me.  My surname is Taylor and I live in Dorset.  Oh and my grandma's name was Margaret.  The coincidences just pulled me to the book to make it that little bit extra special for me.  The blurb made it sound like major love triangle territory but actually this was minimal and never really took off which I was grateful for as you guys know I'm not that big on love triangles.
This book is really well paced, I was practically devoured it.
I loved Cassie's spunky personality- moving to the country to work on a farm where she's never seen cows, is met with anger from Robert but she's determined to stick it out.  Then joining the ATS to actively help the war effort. Her determination is so admirable that I couldn't help but admire her personality.  Clearly this wins Robert round as well because he becomes her love interest.  I felt I needed more from Robert in how he actually feels for Cassie because one minute he seems to despise her and the next he loves her.  I wanted to see and feel more of this transformation.  I really enjoyed having his point of view though, until when he is fighting in Italy towards the end of the book.  Let's say there is an 'incident' or 'transgression' that while Cassie could eventually forgive him for, I could not.  I became quite hostile towards him which tarnished the book a bit for me.  I wish that whole section hadn't occurred.
Cassie's old granny was fun to read about- a quirky lady that is forever polishing her daughter's shrine, and Stephen, Robert's twin brother is an all round nice guy.
Over all apart from one little thing that I wish hadn't happened this book would have been perfect.  So for me it's 4/5 stars.  A thoroughly enjoyable historical read that once you start reading you'll find very hard to put down, due to the amazing heroine that didn't fail to make me smile.