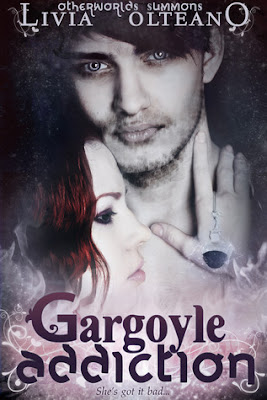 Summonari don’t trust. Under their command, they summon any number of creatures from the Otherwolds—but never trust them outside of the summoning.
Gargoyles don’t love. Fierce descendants of dragons, they function on power and fear—never love.Karla isn’t the happily-ever-after type of girl. No territory-hungry guy is going to stick flags all over her unclaimed grounds.Kann’s world is death and betrayal. As Dar Primus of Haus Varis, he’s expected to follow tradition but he’s not your regular gargoyle. In fact, he’s anything but. One fateful Friday night, Otherworlds collide. Stuck together in one world or another, Karla and Kann face everything from Awakenings and turbulent love to Festnavals and bloodthirsty scorned suitors.If there’s one thing they can’t escape, it’s the addiction to each other. And they’ve got it bad.

Excerpt from Chapter 1 of Gargoyle Addiction by Livia Olteano


I wasn’t the happily-ever-after girl; I’d known that for a good while. Becoming the adorable housewife or the poster girl for mommy of the month would be someone else’s job, never mine. Considering my family history, I’d most likely die before age thirty-five. I couldn’t have kids thanks to a stupid accident from when I was ten. Sure, men drooled to flag my territory first thing when we met, it was their thing. Mike thought it had to do with my responsible aura and good karma, but my karma sucked if you asked me. I was false advertisement: my grounds were barren and the structures would implode in a couple years. Best-case scenario, the guy would fall for me…and I’d be crushed to give him the ‘good’ news. Worst-case scenario, I’d fall for him and he’d leave well before that particular confession point. Either way, it wasn’t looking like much of a plan.
I shook my head. “You know, if you’re that desperate to find him a date we can always put up some ad or something. They have places online for that, too. Plus I’d hate to see how that blonde’s lips would twitch at the news you were trying to hook me up with her sugar daddy.”
“Karla…I just want you to be happy. And I would be happy to know my knucklehead of a brother has someone like you to go home to.”
My eyes fixed on the moon. “I am happy with things as they are. You’re my best friend and I love you—you know that. But just because you found the perfect guy for you doesn’t mean you’re on this sacred mission to pair off everyone you know.”
He snorted, obviously unimpressed with my deflecting skills. Well I just had to bring in the big guns, then.
“Is Joseph coming home tonight?”
It was a sly counter-attack. Joseph—my boss and his lover—was a renowned workaholic. He was the epic in the all-stars hall of workaholic-ness. I knew—I was Joseph’s personal assistant after all. The man was the type who forgot to eat if you didn’t pester him with breakfast, lunch and dinner. Since my personal leave was starting Monday, I wondered if he’d die of starvation.

“He said he’d be home sometime tonight…” Mike muttered.
Posted by wrathsqueen at 10:25